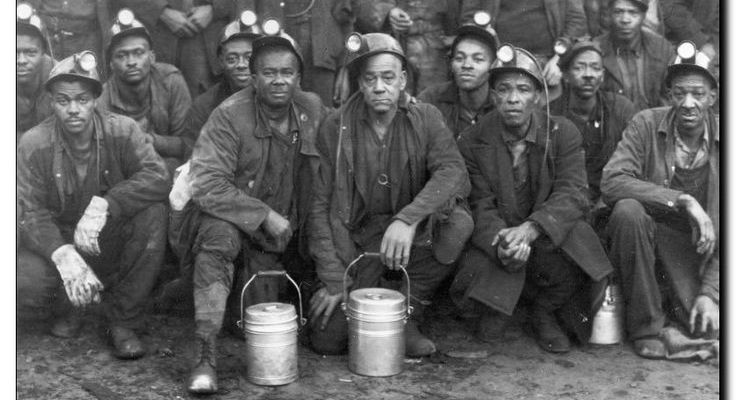 African Americans have been mining coal and fighting bosses for over 200 years. Slaves were working in coal mines around Richmond, Va. as early as 1760. During the Civil War, a thousand slaves dug coal for 22 companies in the “Richmond Basin.”

Black miners were expected to load four or five tons of coal. Slaves able to fill this quota were fed supper. Those who couldn’t were whipped.

Slavery in the mines didn’t end after the war in 1865. For decades prisoners convicted of “vagrancy” and “loitering” worked as virtual slaves for private outfits in Alabama, Georgia and Tennessee. From 1880 to 1904, 10 percent of Alabama’s state budget was paid by leasing prisoners to coal companies.

African Americans accounted from 83 percent to 90 percent of these slave miners in Alabama. Sixty-nine percent of Tennessee prisoners digging coal in 1891 were Black. Some poor whites were railroaded to jail too.

Conditions were horrendous in these convict mines. Nearly one out of ten prisoners died annually at the Tracy City, Tenn. mine operated by the Tennessee Coal and Iron Company (TCI).

TCI was bought by United States Steel in 1907. USS continued to operate TCI’s mines in Alabama for another 20 years. Reparations are owed by USS and the JPMorgan/Chase Bank whose financial ancestor set-up this steel Goliath as the first billion-dollar corporation in 1900.

Three hundred miners with guns freed prisoners at TCI’s Briceville, Tenn. facility on July 15, 1891. The following week 1,500 miners returned to free more prisoners. H.H. Schwartz of the Chattanooga Federation of Trades reported that “whites and Negroes are standing shoulder to shoulder” and armed with 840 rifles.

James Knox, an African American convicted of passing a $30 bad check, was tortured to death by guards at Alabama’s Flat Top mine on Aug. 14, 1924 because he was unable to meet the mine’s daily ten-ton quota.

The uproar over this murder finally forced Alabama to shut down its slave mines. On July 1, 1928, 499 Black prisoners singing the “Negro” spiritual, “Swing Low, Sweet Chariot”, turned in their lamps and picks for the last time.

Black Labor Summoned to the Mines

By 1930 there were over 55,000 Black coal miners. That year African Americans accounted for 53 percent of Alabama’s coal diggers.

These Alabama miners went on strike in 1894, 1904 and 1908. Eleven thousand miners—75 percent of whom were Black—struck again from Sept. 7, 1920 to March 12, 1921. Among the Black leaders were J. F. Sorsby, United Mine Workers District 20 vice-president, and International organizers, William Prentice and George H. Edmunds.

Despite bold tactics that included dynamiting a Southern Railroad train carrying scab coal, the strike was crushed by the National Guard. At least 16 people were killed. But the UMW came back to organize these mines in the 1930s during the Great Depression when militant struggles were being carried out by labor.

The “mine wars” in Mingo and Logan counties from 1919 to 1921 produced the biggest armed confrontation in U.S. labor history. Logan County Sheriff Don Chaffin was paid $32,700 a year (worth about $400,000 today) by mine owners to keep out union organizers.

Following the assassination of the pro-union sheriff Sid Hatfield on Aug. 1, 1921, 8,000 armed miners, one quarter of whom were Black, marched on Logan County. While ten union members were killed at Blair Mountain, one hundred of Chaffin’s mercenaries were slain.

Army Gen. Billy Mitchell wanted to bomb the miners. Only the dispatch of 2,500 soldiers by President Warren G. Harding prevented the union’s victory.

The mechanization of mines has wiped out 400,000 union jobs since 1950. Black workers were targeted first for dismissal. Just a few thousand African Americans are working in mines today.

The 14 miners killed last month in West Virginia were white. Most of the people who drowned in New Orleans in the aftermath of Hurricane Katrina were Black. Capitalist greed and the Bush administration are responsible for all of their deaths.

Articles copyright 1995-2012 Workers World. Verbatim copying and distribution of this entire article is permitted in any medium without royalty provided this notice is preserved.